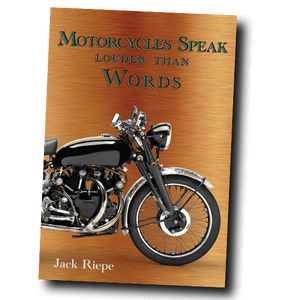 The long awaited Motorcycles Speak Louder Than Words will ship on January 22, 2018.

The winter has arrived with half of the country blanketed in snow and with the open blacktop salted like a preserved salmon. Even in the milder states, temperatures have dropped faster than bowling balls through delicate pastry. The winds are raw and legions of motorcycles are dozing fitfully on battery tenders from coast to coast.

Delayed six months and swelled by 31,000 words, this windbag of a writer has bet the farm and a shrinking literary career (our farm, his career) on the companion book to Conversations With A Motorcycle. Edgier, though written in a softer tone, Motorcycles Speak Louder Than Words represents an even more controversial perspective on riding in the mid-1970s.

Zadic & Deverelle Publishing, LLC apologizes for the delays incurred by the author and appreciates your patience.

Thank you for your continued patience regarding the release of Jack Riepe’s new book — Motorcycles Speak Louder Than Words.

The launch of this new work has been delayed four times as the result of 6 chapters being added to the text, a move demanding the author publish it under an assumed name, and a hurricane hitting our corporate office.

Its looking like this is going to be simply amazing.

As a result, this book is crawling through production, but will be released in late December.

Some say this is Riepe’s best work, with more description, deeper character development, and the details of 9 weeks of the author’s life — kept hidden from public view.

We are working to get this book to you as quickly as possible.

June 16 — Zadic and Deverelle Publishing, LLC today announced an agreement with writer, humorist, and public speaker Jack Riepe, to publish four books over the next 9 months. These include:

Primarily known to an international readership through his column in the BMW Motorcycle Owners Of America’s (MOA) publication — the Owners News (ON), and through the groundswell of attention generated from his first moto book, Conversations With A Motorcycle, Riepe’s talents are a unique fit for the Zadic and Deverelle imprint.

“Our motto is ‘Scribe nobis inopinatum,’ or ‘Write the unexpected,’ ” said Beatrice W. Deverelle, associate publisher and content director. “ Jack Riepe certainly does that. For the past nine years, his moto columns have delighted thousands of monthly readers with bizarre plot twists and unexpected endings. Conversations With A Motorcycle was a landmark effort in enthralling serious riders and non-riders alike. Riepe is exploring and extending that style in the next two books of his moto saga.”

Deverelle added that the muscle and creative support of this company will guarantee an ample supply of Riepe’s books, prompt shipping, and new books. “Some people have been waiting two years to get a copy of Conversations With A Motorcycle,” said Deverelle. “Riepe’s books tend to become collectors items and it is not uncommon to find used copies selling for more than $100 on Amazon. We’ll get the books out. All Riepe has to do is write.”

Jack Riepe has been a professional writer for 35 years, primarily concentrating in corporate and political public relations. His stories and quotes have been carried in major newspapers across the country and in Europe (albeit attributed to his clients).Riepe left the public relations field upon discovering that senior PR writers were devoured by younger PR practitioners, and “spit out” in social media. He is a writer demanding relevance.

“Zadic and Deverelle is making it possible for me to tell my stories, in my language, without having to add political vanilla,” said Riepe. “I was afraid they were going to insist on trigger warnings. Tas Zadic told me, ‘A two-inch fuse would be more appropriate.’ This company is giving me the freedom to write what I want and a broader venue for distributing it.”

In addition to Riepe’s books and magazine articles, he plans to write a regular posting called “Riepe’s Rampage,” dealing with the ghosts in his house, his love hate relationship with computers, failed romance, BMW “K” bike motorcycles, his inability to open anything marked “easy open,” and dozens of other topics — on his new book website (jackriepe.com).

For more information on book availability, pricing, or to order, go to jackriepe.com.

We ship to Canada: Extra postal charges apply, Canadian patrons will be billed an extra $10.53 (via PayPal).

All books are shipped through the USPS and may take up to 14 days for delivery. Shipment to Canada, Europe, Asia, or the Pacific Rim is subject to local postal conditions.

Sign up here to receive the latest news and updates about my books and events.

You have Successfully Subscribed!